After a city-wide effort to scrub embarrassing English translations from street signs ahead of the 2008 Olympics, Beijing is embarking on yet another linguistic rectification campaign – this one aimed at restaurant menus — that’s bound to leave foreigners a bit disappointed, if better informed. 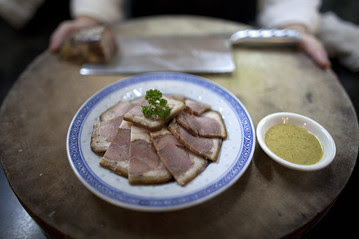 The Beijing Foreign Affairs Office and the Beijing Speaks Foreign Languages Program have jointly published a book offering official guidance on the translation of Chinese restaurant menus featuring “proper” English translations for 2,158 Chinese dishes, the state-run Beijing Daily reported on Tuesday.
Gone are the days of “four glad meatballs” (四喜丸子), which the book says should be henceforth known as braised pork balls in gravy. And as for “tofu made by a woman with freckles” (麻婆豆腐)? From now on, the iconic Sichuanese dish should be simply indentified by its Romanized Chinese name, mapo dofu.
Many restaurant menus feature English translations so strange they confuse, not only foreigners, but even English teachers well versed in “Chinglish,” the paper quoted an unnamed official with Beijing Foreign Affairs Office as saying.
“The names of Chinese dishes are rich in meaning,” the official said. “It’s not always just about the ingredients. Sometimes it’s a mixture of culture, historical events, peoples’ names, etc.”
Mangled translations have long been a source of amusement to foreigners visiting Beijing – and an embarrassment to city officials eager to present China’s capital as a sophisticated, global metropolis. With the Beijing Olympics looming, city officials launched a war on Chinglish in 2006, aiming to eliminate non-standard translations of everything from hotel names to traffic warnings. Though some of the worst examples were corrected – a cultural attraction once infamously identified as “Racist Park” was eventually renamed “the Chinese Minorities Park” – restaurant menus have remained stubbornly resistant.
Debate was unavoidable during the compiling of the list, according to the Beijing Daily. Professor Chen Lin of Beijing Foreign Studies University, one of the experts involved the effort, said many names of dishes sparked heated discussions. According to Mr. Chen, considerable discussion was devoted to the translation of one poultry dish (童子鸡), sometimes translated as “chicken without sex,” with the committee eventually agreeing on the less colorful but arguably more appetizing “spring chicken.”
In other cases, the group appears to have been more concerned with potential misunderstandings arising from stereotypes about Chinese eating habits. In the case of giant meatball dish “red-braised lions’ head” (红烧狮子头), for example, the book recommends “braised pork ball in brown sauce” instead. “If foreign customers found a lion’s head in the menu, I’m sure they will complain it at animal protection organizations,” the newspaper quoted Mr. Chen as saying.
Exactly how Chinese restaurants come up with their translations – some of which cannot be mentioned on a family-friendly website – is unclear, though one widely noted photo of a Chinese restaurant called “Translate Server Error” suggests online translation software might play a role.
Regret over the potential loss of charming menu missteps is not limited to expats. Reacting to news of the new book, some users of the Twitter-like microblogging service Sina Weibo posted photos of their favorite translation errors. Others said the best solution was for restaurants to provide photos of the dishes to help foreigners order because, as one user put it, “some of the Chinese names are just too meaningful to express in English.”
Whether Beijing’s restaurants will forgo the risky convenience of online translation tools in favor of the government’s recommendations remains to be seen. Beijing Daily quoted the Beijing Foreign Affairs Office official as saying local restaurants would be encouraged to use the book as a reference when making their menus but would not face punishment for going their own way.
Have a favorite Chinglish menu item? Let us know in the comments below (bearing in mind, once again, our website’s family-friendliness.)
– Stefanie Qi
Posted by supersupergirl at 21:09

Email ThisBlogThis!Share to TwitterShare to FacebookShare to Pinterest
Labels: chinese, chinglish, Made in China