While I was at the convenience store, the Tuna and Mayonnaise crisps caught my eyes.
Beside it were Tuna Mayonnaise cup noodles also by the same Korean Brand Nong Shim. 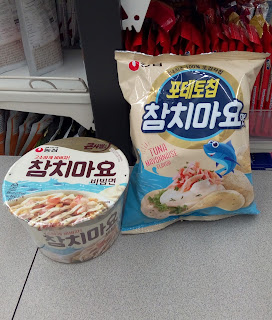 Decided to try the cup noodles because I was just curious about how it would taste. 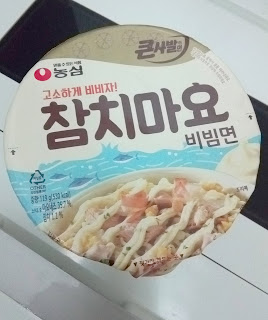 Tuna Mayonnaise is normally a sandwich filling that is slightly creamy with chunks of tuna.

I can't read Korean so the English labelling was helpful and it was strange that the ingredients has Worchester sauce!!!! When you peel the lid back, there are two sachets, one is the sauce and the other is some yellow thing. 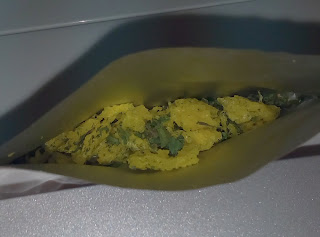 There are some sort of brown bits within the noodles which I believe are possibly soya bits pretending to be tuna???? 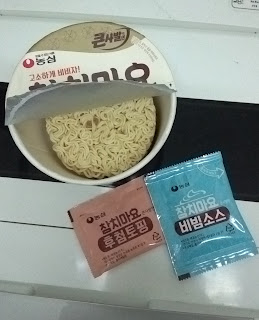 To eat, you remove the sachets, pour boiling water in the noodles.
Leave it for a while and drain the water.
There are holes at the other end of the lid which you pierce to drain.

The mayonnaise sachet was big and I was quite skeptical about the taste because that much mayonnaise is going to be really sickly. 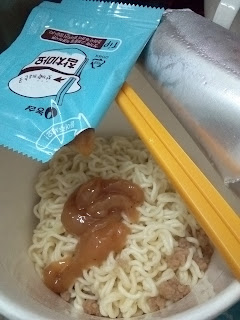 The colour of the mayonnaise was strangely brown!!!
After mixing it, the sauce turned creamy yellow so there must be a lot of creamer in that paste!! 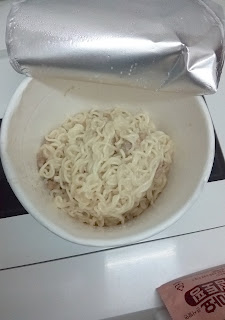 As for the taste, it definitely does not taste like sandwich filling but there is a strong creamer powder aftertaste in your mouth. 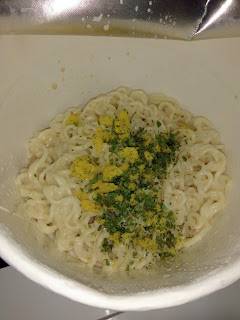 Not quite convinced by these noodles because they are a bit too sweet for my liking,

Posted by supersupergirl at 11:57 No comments:

There are so many ready made meals to choose from these days.
Granny Marys JUST collection appealed to me because the logo was nice and being a graduate from QMUL I liked the Mary in the name.

The JUST collection does not have pasta/rice which is makes it great for sharing and they can be microwaved which saves up to 45 minutes of time and gas when you can have it almost in flash!!

Without thinking, I bought most of the range but sadly forgot to buy the Cottage Pie. 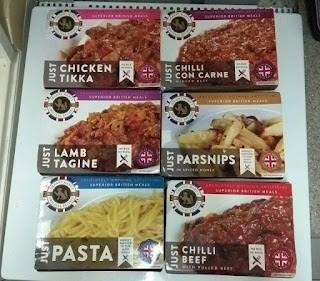 As soon as I got home, I was so excited to try them but sadly I could only try 2 boxes because they are quite big portions.
It was really hard to decide which one to try because they are all British classics.
Luckily, they don't stock the full range or I would probably have to buy it all!!!!
In the end I chose Chili Beef (with pulled beef) as it was pulled beef and not minced beef. 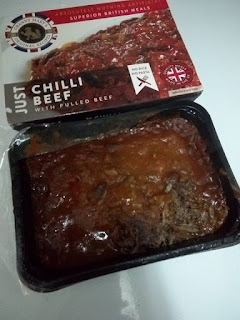 Basically you remove the card sleeve, pierce the film, microwave it for about 4 minutes, let it stand for 1 minute and put it in for another 3 minutes.
I paired the chili beef with Indian Rice. 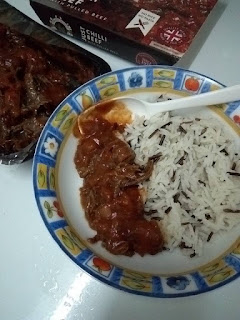 The taste was fantastic with chunks of pulled beef but I underestimated how hot it was and it is spicier than other ready to eat chili con carnes and curries that I have tried.

I also tried the Parsnips in spiced honey because I have to try everything at once if I can because I just can't resist food and all being my favourite British classics!! 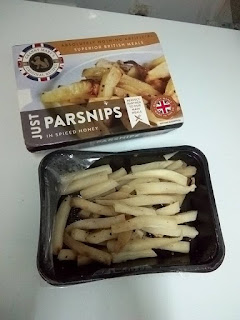 The parsnips were sweet with a nice hint of cracked black pepper.
The sweetness was quite soothing after that hot Chili Beef.
I can't wait to try the others soon but I am so busy with restaurant invitations that I don't have time and appetite to eat at home.